I like to think I’m a fairly determined mum. When I promise something to my children I will do everything in my power to make it happen. I promise a Fireman Sam truck and I will deliver, by the skin of my teeth. I promise a trip to the farm or that we’ll go for a walk in the woods, we will do it. Toddlers never forget and I never want them to feel they have to remind me of anything. They will remind me anyway, because (read the full post here)

I always look forward to Bank Holiday. I know what you’re thinking, what’s the difference, I don’t work anyway right? I’m just thinking about those toddler fights I referee, the meals I make and the bums I wipe throughout the day with the bonus of getting peed on occasionally. But no, what I do isn’t work work (werk werk werk)
(Click here to read the full post)

I look up quite regularly what ingredients are in season as each season arrives. This is because when vegetables are a-plenty, they tend to be a lot cheaper. They are also full of plenty of goodness, being naturally grown, rather than grown artificially. So I’ve been told. I also find that if we branch out with a new veg, we’re forced (click to read the full post)

Do you love flowers or do you know some that can’t get enough? Keep reading for inspiration and to shop the look…

Interior Design: Flower Lovers Decor & Accessories. If you’re a huge fan of flower decor then this is your one stop shop for all things floral. When decorating a room, images of flowers soften the interior design and having real flowers in a vase has been proven to lift your mood (a faux flower display also works), it’s a bonus that (click to view full post)

I took the plunge yesterday and went self-hosted. This means my site will still be the same, it’s just at a different address – http://firstooth.co.uk

It’s still a work in progress with the aesthetics. I’m not sure the plain, square theme suits the ratchetness of the blog, but it’ll get there.

To everyone who has been kind enough to subscribe via email – please use the new form, on the new blog. And to everyone else, please join me over there too!

Thanks everyone! I’m off to read a book with catbags in (black cats in toddler language).

We haven’t bought the children many gifts this year. I feel a little tight, like we’re depriving them of plenty of things they’d probably love to own and play with. Toys that’d probably be the size of our bloody lounge and play tunes that slowly drive you to insanity (if the actual owning of children doesn’t do that itself).

When I look at the little pile stacked neatly on the babys’ wardrobe, ready to be wrapped, I say to Mr Firstooth, ”is that enough, will that do?”, completely bypassing the point of Christmas. Our eldest is two, so, of course it will do.

At the ages of one and two, they have no concept of gifts, birthdays, Christmas. They haven’t a clue what they would like as a gift, if they even need a gift? 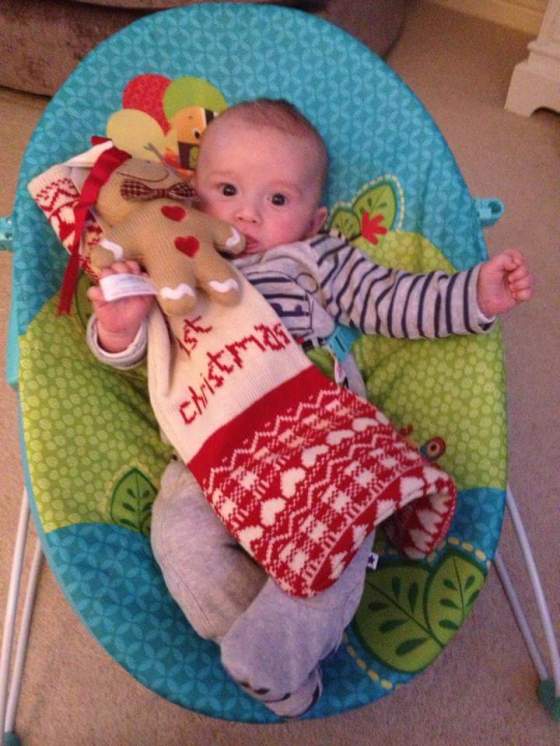 Already, we don’t just have a toybox overflowing with toys, every nook and cranny is spilling with all sorts of toys, or ‘stuff’ as I see it. Most of which rarely gets played with. Most toy sets get split up and spread across the house, pieces in pillowcases and slippers, because children have NO RESPECT FOR SETS. So do we really want to voluntarily add to this mayhem?

I would love to spoil them with toys and see their excitement as they open their many presents. But I’m inclined to think, what’s the point? This Christmas I want to enjoy the magic of the day and share that with our family. Start Christmas traditions like the mince pie and wine for Santa (I hear Santa favours wine) and the Carrott for Rudolf (which Rudolf will donate to the Christmas day dinner after his nibble).

Babies and toddlers want our time, our attention, laughs, sweets, crisps, chocolate, tv, Peppa flipping Pig and to probably play with the wrapping and box their presents come in. That, we can give them, it won’t be a gift that’ll be wrapped, but that they will get, every year. This year it will accompany a little Lego set, a few books and a big play set.

Next year may be different, because I’m sure our then three year old will have a list. A bastard list filled with every toy or game he ever sees advertised. But a list I can work with, this year it’s a gift guessing game. So I’m guessing that a few things to unwrap will do. The rest will be about the magic of the day and the memories we make. 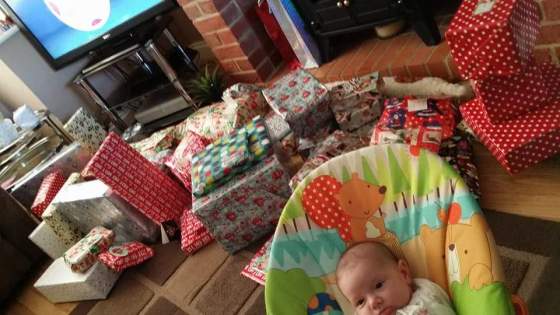 I mean, last year they didn’t even fit under the tree

I’m writing this post with a sore head, a snotty nose and a heavy heart.

I haven’t written a post in a while and I had set time aside this weekend to write one. Mumblings about parenting. Moans about the heartbreak and hardship when children are ill, alongside us. The long nights we’ve faced and the tiredness we’ve fought through.

That would have been a fairly pathetic post, in light of the goings on in Paris. The devastating act of a group of people, resulting in deaths, injuries and a widespread fear.

The irony is, that in the midst of our nightly 4 hour waking with a very poorly baby (what would have been this weekends post), I checked my phone. A distraction from rocking the baby and wiping her ever so drippy nose. That was when I saw the news of a terrorist attack in Paris, at around 2am. And what a distraction that was.

Was I reading this right? What was happening? Why was this happening?

I turned to Mr Firstooth, who was sulking, due to a minor dispute about whose turn it was with the baby. I told him what I’d just read and I could see it hadn’t registered with him. It didn’t sink in, that there were terror attacks in Paris. All until the next morning, when he saw it himself on the news. Far more eye-opening to see the devastation than to read about it, or hear about it mid-sulk at 2am.

It then became the main conversation of the day. How it puts things into perspective. How we should appreciate our lives and family, because in a split second, through someone’s act of pure selfishness and without warning, it can all be taken away.

One life lost is an entire family’s heartbreak. An undeserved and brutal loss.

An evening in Paris which couples, friends and families were enjoying and one which was probably looked forward to, not knowing most wouldn’t make it home.

One area left hundreds subject to a horrific shooting and another that instilled fear in hundreds of football fans, once the realisation that, they weren’t fireworks, they were bombs, set in.

It just takes one person to devastate and destroy hundreds of people’s lives and spread sadness across the world, it could be anywhere. ‘This is just the beginning’ it has been said. Where will be next?

If we have learnt anything this year, it’s that nothing should be taken for granted. Each day is a blessing. And in times of such callous killings, the world stands together.

I wish there wasn’t this amount of evil in a world my children are growing up in. Tonight I will hold them a little tighter, say ‘I love you’ more often and keep those who have suffered and their families in my thoughts.

Join Me Here Too: